TROJENA is new global destination for mountain tourism in NEOM 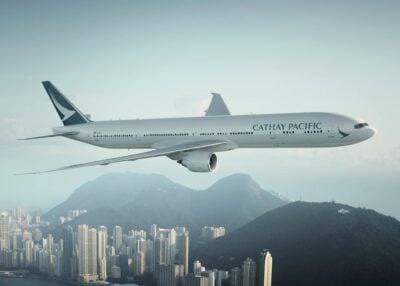 The airline will be rerouting its trans-Pacific New York City to Hong Kong flight over the Atlantic Ocean instead.

The transatlantic option is also more favorable than the usual Pacific path because of “strong seasonal tailwinds at this time of the year”, Cathay Pacific said.

Pre-pandemic, Cathay Pacific operated three round trips between the two cities every day.

Cathay Pacific listed a newly routed New York-Hong Kong flight scheduled for April 3, 2022, on its official website. According to the information posted by the airline, a nonstop flight would remain airborne for 17 hours and 50 minutes.

New Cathay Pacific’s flight will surpass a Singapore Airlines flight from Singapore to New York City, which travels a shorter distance in a longer time – about 15,343km (9,534 miles) in 18 hours.

The new Cathay Pacific’s path also steers clear of Russia. Many international air carriers have cancelled routes to Russian destinations or are re-routing their long-haul flights in order to avoid Russia’s airspace closed over Moscow’s ongoing aggression in neighboring Ukraine.

Russia closed its skies last month to several European countries and all UK-linked flights in a tit-for-tat response to a similar ban placed on them.

Cathay Pacific said that it is seeking an overflight permit for the journey which will fly across the Atlantic, Europe and Central Asia.

Starting on April 1, flights from the US and eight other countries will be allowed to land in Hong Kong again, as the government relaxes some of the world’s toughest COVID-19 restrictions.