The most child-friendly National Parks in the USA 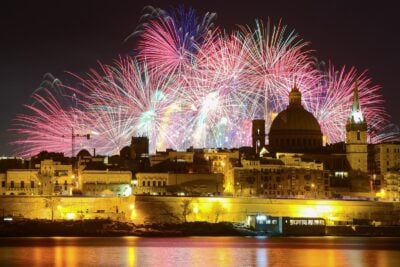 Malta Tourism Authority (MTA) announced the dates for the 21st edition of the renowned Malta International Fireworks Festival. This spectacular event has gained a huge following and is keenly awaited by the Global Fireworks Industry. It is an event produced solely and exclusively by the Malta Tourism Authority (MTA) and will take place April 17 – 30, 2022. The theme for this year’s festival, A Night With Legends, is inspired by late music legends. In fact, each competition participant will be asked to select the Musical Score for the PyroMusical Display from the likes of Aretha Franklin, Michael Jackson, Amy Winehouse, Freddie Mercury and many more!

“The Malta International Fireworks Festival has always been a big draw for tourists from all over,” said Michelle Buttigieg, MTA Representative in North America. “The very fact that it takes place in seven different locations around the Maltese Islands, provides an opportunity for tourists to experience the spectacular displays in various dramatic Maltese settings.”

This year, there is a new production format that will be adopted, judges will be elected from the board of the International Symposium of Fireworks and the let-off of all the fireworks will be from the sea, a special setting which is also important in relation to the Symposium.

The event will be hosted in seven different locations over different days, three of which will host a competition between foreign and local competitors. The last day of the festival is the ‘Grand Finale’ where the Malta Tourism Authority takes the opportunity to announce the winner chosen by the Jury – Link to Dates and Locations

The Malta International Fireworks event is an important event in Malta’s cultural calendar.

Fireworks in Malta have a long tradition which is centuries old. The craft of pyrotechnics in Malta goes back to the time of the Order of the Knights of St John. The Order celebrated the most important feasts by special pyrotechnic displays. Later fireworks were used for special occasions, such as the election of a Grand Master or a Pope. Today, this tradition is still very popular, attracting many people.

For this 21st edition of The Malta International Fireworks Festival there will be nine PyroMusical Displays competing against each other, and seventy-two Local Licensed Fireworks Factories & Clubs organizing traditional fireworks displays. A PyroMusical Display is the combination of a pyrotechnical display synchronized with music. The Malta International Fireworks Festival is unique because apart from the PyroMusical Displays, they include these Traditional handmade Maltese Fireworks, when local participants will have an opportunity to showcase their artisanal expertise which cannot be compared to the machine-produced fireworks.

The sunny islands of Malta, in the middle of the Mediterranean Sea, are home to a most remarkable concentration of intact built heritage, including the highest density of UNESCO World Heritage Sites in any nation-state anywhere.  Valletta built by the proud Knights of St. John is one of the UNESCO sites and the European Capital of Culture for 2018. Malta’s patrimony in stone ranges from the oldest free-standing stone architecture in the world, to one of the British Empire’s most formidable defensive systems, and includes a rich mix of domestic, religious and military architecture from the ancient, medieval and early modern periods. With superbly sunny weather, attractive beaches, a thriving nightlife and 7,000 years of intriguing history, there is a great deal to see and do. For more information on Malta, visit here.