5 US airports rank in the World’s Top 10 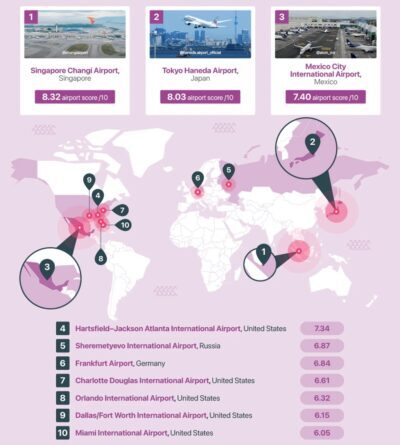 New research reveals the best airports in the world & 5 U.S. airports rank in the top 10!

But which of the world’s airports are the best for travelers? Looking at a number of factors including delays, parking costs, transfer times and more, industry analysts have ranked the world’s 50 busiest airports.

New research analyzed airports on a variety of factors, such as on-time performance, the cost of parking and transfers, transfer times and the number of restaurants and shops, to reveal the world’s best airports.

Singapore Changi is one of the busiest airports in Southeast Asia and offers an unrivalled experience for its passengers, with a score of 8.32.

Changi has the second-highest number of shops on offer (224) and allows you to park for just £19.14 for a week.

Another Asian airport comes in second place, with Tokyo Haneda scoring 8.03. Haneda is also incredibly busy, yet was the top-scoring airport for on-time flights.

The airport was once Tokyo’s main airport but has since tried to shift its focus to premium business routes.

While it scored poorly on some factors, Mexico City has 226 shops and is also just seven minutes away from the city center.

Five of the top ten airports are located in the USA, with Hartsfield–Jackson Atlanta International Airport ranking the highest in the USA and at fourth place overall.

Hartsfield-Jackson is also the world’s busiest airport in terms of passengers welcoming over 110 million passengers through its terminals in 2019.